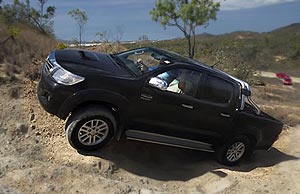 Last week I attended the press release of the new Toyota Hilux up in Townsville and I got to spend a fair amount of time both behind the wheel and in the front passenger seat as Toyota kindly let a bunch of us put the new Hilux through its paces.

We also got a chance to have several glimpses of how the company perceives its market place and I’m not entirely sure that I liked what I saw in those little peeks.

Remember back when Toyota was having all that trouble with sticking throttles? There were suggestions then that Toyota couldn’t accept that they were anything but perfect back then and maybe that same attitude still prevails in the Toyota headquarters back in Japan.

The Toyota Australia PR guys gave us one glimpse into the workings of Toyota back in Japan when they mentioned that they were really trying to encourage Toyota to increase the recommended carrying capacity of the Hilux to bring inline with some of its competitors but Toyota Japan just didn’t seem to see any need to do that.

Then the vehicles themselves gave us another glimpse into the way Toyota sees the market place. This was a new Toyota Hilux … a chance to really stick it to the opposition … but apart from some changes in pricing most of the variants across the Hilux range were lacking and the flagship SR5 was just plain disappointing.

So apparently Toyota feels that it can deliver less for more and people will still buy their products. Sure, the Toyota Hilux has been a big seller in the past but unless Toyota changes its attitude it may not remain such a big seller.

Can you tell that I was basically under whelmed by the new Hilux?

Now I have to admit that I’m a fan of diesels … they’re economical and powerful … and I haven’t driven a diesel that I didn’t like … but I got pretty close to disliking the one in the Hilux.

The 3.0-litre turbo diesel that is in the new Hilux range has been around for quite some time and it looks good in the engine bay. There’s plenty of room to work on it and Toyota haven’t tried to hide it under a mountain of plastic shrouding.

I can also say … after watching the fuel gauge on several Hilux models that I drove … that it’s very economical and it’s probably got a lot of pulling power although we didn’t actually get to tow anything during the press drives.

What I can say with some certainty is that it’s noisy and almost sluggish. Part of the test drive programme took us up a long long climb through numerous hairpin bends and in places the auto transmission was down into second and I would have had a bank up of traffic behind me if there had been anyone else on the road other than more slow diesel Hilux utes.

I could actually get the SR5 I was driving to accelerate on that climb hill but you could not have described the performance as anything but very ordinary.

In discussions with the other writer that I was sharing the vehicle with we wondered if Toyota is shipping their diesel Hilux models with the air/fuel mixture wound right down because it certainly seemed like it.

Perhaps it was jumping straight from a noisy diesel into the petrol version that made me think that the 4.0-litre six-cylinder petrol Hilux was very quiet … or maybe it just was … but the reduction in noise levels was much appreciated.

There was even some improvement in performance … but not as much as you would expect. At times when we accelerated hard to overtake the petrol Hilux would make all the right noises but didn’t get us past the slower vehicle particularly quickly.

Where the petrol version really failed in my estimation was in fuel consumption. There’s no doubt that we were driving the vehicles quite hard at times but even after taking that into account I have to say that the fuel gauge seemed to drop like a stone. 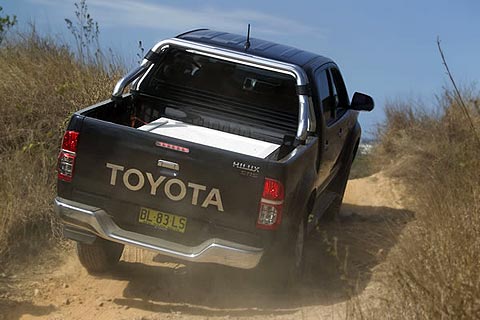 Ride and Handling
The Toyota PR guys thoughtfully placed hefty weights in the back of each of the test vehicles so the ride was good … even over corrugation there was little or no bounce from the rear suspension.

Steering was precise and on the dirt you pointed the vehicle where you wanted it to go and that’s where it went even if you were pushing along at a fair pace. On some heavy corrugation on one of the dirt roads we traveled over the Hilux I was in kept a straight line and didn’t want to change direction at all.

Off road … well you’re always going to get tossed around a bit as you navigate your way through ruts and washouts and the Hilux was no better or worse than you would expect. 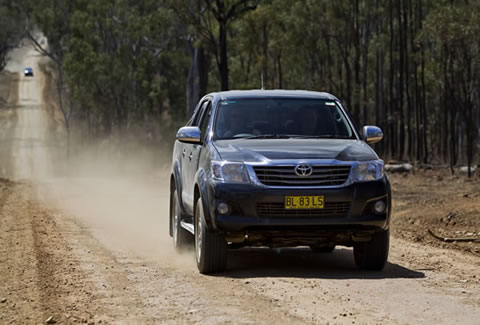 The interior
The seats were very comfortable and I can say that despite having a disc in my back pressing on my sciatic nerve the whole time I was away. There’s also plenty of legroom for the driver and front seat passenger but I’m not sure I would want to be in the rear seat if someone as tall as I am was driving.

The dashboard layout was fine … the instruments were easy to read and all the controls were within easy reach … but the dashboard itself looked cheap and nasty for a flagship model.

I was also surprised to find that the Hilux still comes with a manual gear lever if you want to shift between the two and four-wheel drive options. Not only was the gear lever tucked away behind the main gearstick and awkward to reach but knowing whether you had completely engaged four-wheel drive was a hit and miss affair and you only found out for sure when you hit the accelerator and didn’t move while a grinding noise came from the transmission.

The exterior
As I mentioned earlier, a tub liner isn’t standard equipment in any of the Hilux range which seems a little strange to me.

The sidesteps that you see in the photos are a nice touch but if you’re going to take the Hilux off then I’d skip the sidesteps. By the end of four days of road testing the sidesteps on some of the vehicles were looking a little out of shape and someone … possibly me … managed to almost rip a sidestep clean off.

The bottom line
Once again it really comes down to a matter of preference and I’m sure that Toyota has enough loyal followers to make this Hilux as big a success as its predecessors but personally if I wanted a 4×4 ute I’d be spending some serious time looking for something other than a Hilux.

I might end up coming back to Toyota after doing that looking but I wouldn’t be rushing down to the Toyota dealer until I had spent some time looking at the alternatives.