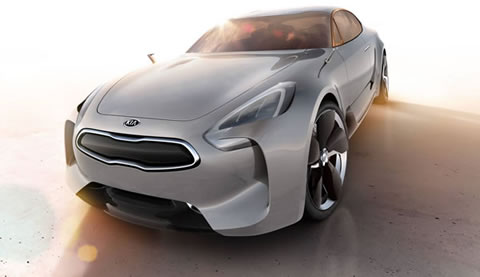 The Hyundai Tiburon? Hmmm … a bit of a yawn.

The Kia Koup? Looks good but it’s not exactly an adrenalin machine once you put your foot on the accelerator.

But now we have the Kia GT concept and if this reaches production … well maybe things are looking up if you want a real sports car at Korean prices.

The Kia GT looks the part … but then so does the Kia Koup … and looks aren’t everything if you want a real sports car so what’s under the bonnet?

Before you get too excited about that just remember that this is a concept and if Kia put it into production (which is highly likely) we may not see quite the same engine/transmission set up).

Kia understand that if you want to drive a car like this then you want to make a statement … even at night … so the Kia GT concept comes with headlamp units that each house a bank of six recessed LED lights that not only give you a good view of the road at night but are also very distinctive when viewed from an on-coming vehicle.

The body features a trim line made from copper that runs from the base of the A pillar up and along the roofline and ends at the bottom of the rear window. The brake calipers are also finished in copper.

Access to the vehicle is reminiscent of the latest Mazda rotary and make it easy to get in and out of the vehicle despite the size of the transmission tunnel … Kia emphasized the size of that tunnel on purpose.

The seats … well if the Kia GT does go into production you can expect to see something different in the seating department and the dash is probably going to get a makeover to take it back to something more conventional.

The instrument panel features three layers of organic LEDs and, while this panel first appeared on a concept car last year it may not be ready to go into a production car just yet.

It seems that Kia have decided that door-mounted rear-view mirrors are out of date these days and they’ve been replaced with two LED screens that receive information from two rear-view cameras.

So will it go into production? It’s interesting to note that in Kia’s press release their chief design officer described this as “… a very real car … a car that could roll down the road tomorrow.”