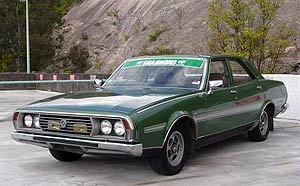 For most people the Leyland P76 was one very forgettable car and even though it somehow managed to win the Wheels Car of the Year award in 1973 it was not much of a car really.

Sure the design fitted right in during the early 1970s and it was built here in Australia to compete with the Kingswoods, Valiants and Falcons of the time but for most people it was a dog that really suffered from poor quality control.

Despite all of its problems there were still people who thought that the Leyland P76 was the greatest thing since sliced bread and one of my mates at the time thought that it was the most wonderful car he had ever purchased … but then he always was a little crazy.

Another guy I know takes great delight in pointing out that the P76 was the only sedan that you could fit  a 44 gallon drums in the boot and still close the lid.

Yes it was a strange car that attracted strange people and its one moment of fame came during the 1974 Word Cup Rally when Evan Green drove a Rover V8 powered P76 to a win in the Targa Florio stage in Sicily.

It was only one stage but that was enough for Leyland and to celebrate they produced the limited edition P76 Targa Florio sedan. Each Targa Florio came with a 4.4-litre all alloy V8 complete with automatic transmission, power steering and a limited slip diff and it seems that’s enough to qualify it as a muscle car. 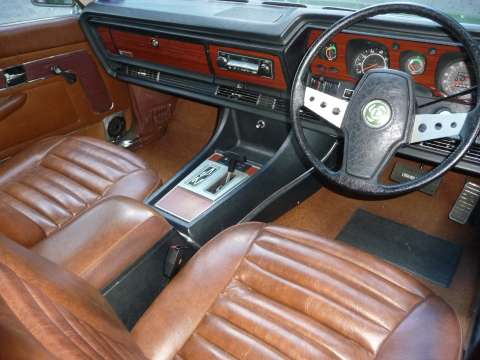 900 of the P76 Targa Florio were built but very few of them remain today and one of those that have survived just happens to be coming up for auction in Sydney at Shannons Spring Auction on October 10.

This particular Targa Florio has been owned since new by just one person … it’s always been garaged … it’s done around 71,450km since new … and if you have somewhere between $8,000 and $12,000 it could be yours.

If you’re interested in learning more about the Leyland P76 then follow this link … they even have a photo of a very rare P76 station wagon.

Update: You will find another person’s view of the P76 here and I thank James for taking the time to write the piece and supply some more photos.

And here is a short video with some interesting background on the P76 courtesy of one of the people who took the time to add their comments below.