Skip to content
4 Comments on We Drive the 2011 Toyota YarisPosted in Toyota By news deskPosted on October 30, 2011September 11, 2018Tagged Toyota Yaris 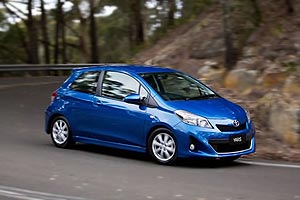 The new Toyota Yaris … breaking out of the mould

Melbourne’s Yarra Ranges was the scene for the release of the 3rd generation Toyota Yaris.  Produced in Japan for the Australian Market the vehicle has been a top selling light car in the European market.

Under the earlier banner of the Echo and re-badged as Yaris from 2005, over 206,000 units have been sold into the Australian market to date and that puts the Yaris up among the top sellers in what is a very competitive part of the market.

The Yaris has long laboured under the label of being a “P” platers or “chicks” vehicle.  After today’s launch by Toyota Australia’s  Executive Director of Sales & Marketing, Matthew Callachor, I’m left in no doubt that Toyota has responded well to extensive market testing and consumer feedback.

This latest iteration is attempting to appeal to a broader market audience.  With its bolder exterior styling and a revamped interior I think they’ve gone a long way to achieving this.

Toyota states that ride and handling for the new Yaris was developed by European and Australian engineers to meet the demands of local tastes and conditions.  Cleary they have succeeded as the new Yaris package delivers a more agile car with greater driving enjoyment and stability due to increased body rigidity, a larger footprint and more responsive steering.

By re-designing key body sections and through greater use of high-tensile steel Toyota has increased the body rigidity and durability of the vehicle while reducing noise, vibration and harshness (NVH) as well as providing a more stable platform for the suspension.  The new body structure has reduced vehicle weight and improved passive and pedestrian safety. 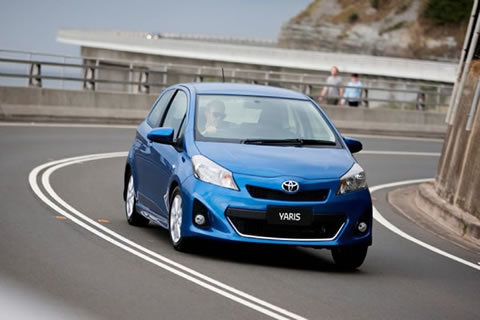 Certainly first glance at the vehicle exterior reveals a more sporty, edgy look.  Sharper lines give a stronger appearance in line with many competitor offerings in the light vehicle sector.  The front air intake is deeper and wider than the previous model and emphasises the cars wide stance and low centre of gravity.

The panelling retains the distinctive sloping belt line but it is more distinct and sharper. A lengthened wheel base has reduced front and rear overhangs extenuating the look of stability.  Front and rear bumpers have sharp edges that contribute to a more efficient airflow.

Yaris is offered in 10 colours, three of which are new to Yaris – Celestial Blue, Glacier and Green Potion most probably in an attempt to appeal to the younger demographic.  While a certain quirkiness associated with earlier models may have gone, the vehicle is by no means bland and maintains an eye catching appeal. 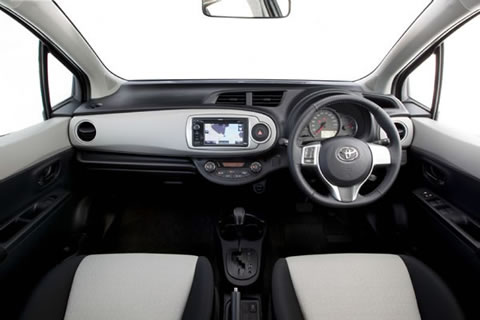 Interior
The new interior is where the vehicle shines.  The entire cockpit is more driver-orientated with a driver’s side instrument cluster replacing the old centre mounted unit.  The shift away from a centre mount is a good thing in my book improving the ergonomic  comfort and functionality for the driver as well as the overall safety of the vehicle with driver focus drawn directly ahead rather than to the middle of the vehicle.

The Instrument cluster has a 120 mm speedometer incorporating a liquid crystal display with constant display of time and outside temperature.  It also provides the odometer reading for the Multi Information Display (MDI).

The cockpit has straight horizontal lines to create an impression of space.  Seating has been redesigned to provide more leg room in the rear, whiplash protection and improved ergonomics through raised edge bolsters which increases body contact area and support.

Sensibly, a centre console has been added to the vehicle to add to the usual assortment of storage areas, cup holders and door panels.  The interior looks and feels stylish and solid … gone is that cheap plastic feel of old.

Forward visibility is excellent through a steeply raked windscreen.  This wide dash area has provided one of the few negatives to the interior layout namely a high level of dash reflection onto the windscreen in sunny conditions.

Placement of anything on the dash area reflects directly onto the glass as brightly as a heads-up display in some cases.  This can be a distraction at best and directly affect visibility at worst.

Safety
The new Yaris has a full suite of passive and active safety equipment that Toyota expects to achieve a 5 star ANCAP safety rating.  Every model has seven “dual-chamber” airbags as standard equipment including a driver’s knee airbag.

Active safety equipment including vehicle stability control and traction control are standard equipment on every Yaris model, as are anti-skid brakes that feature the latest brake assist system and electronic brake-force distribution.  Yaris also has a brake override system that prioritises braking and suppresses engine output if the brake and accelerator pedals are pressed simultaneously.

As a new safety feature Yaris has a buzzer that will sound if the vehicle starts moving while any of the doors are partly open. 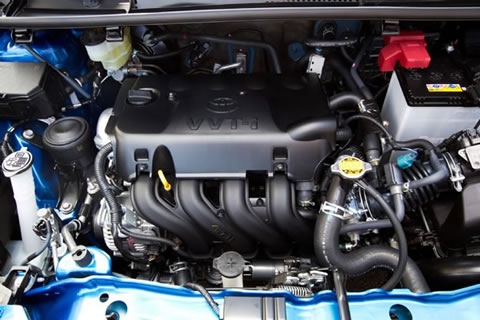 Performance
Toyota claims to have significantly reduced noise vibration and harshness through redesign and inclusion of noise suppression materials in the floor panel, transmission tunnel and firewall.  Foam-based sound insulation material has been placed inside the frame channels further reducing external vehicle noise.  Sound-insulation and sound-absorbing materials have been added to the instrument panel and centre console.

While fuel efficiency has been improved by up to six per cent across the full model range, the two VVT-i engine options produce 63Kw and 121 Nm and 80kw and 141 Nm respectively.

Driveability
Out on the road the vehicle impressed me.  Over 130 kilometres of both city and country roads the vehicle proved to be agile and responsive.

The 5 speed manual ZR 3 door was a particular favourite with the zippy 1.5 litre motor providing plenty of power.  Despite its modest on road weight of just over 1100 kgs the Yaris sat firmly on the road.

The suspension system provided great ride comfort and effortlessly soaked up bumps and handling of all road conditions.  On dirt it handled minor corrugations and potholes with ease.  Steering was direct with no feedback.  The electronic assist power steering actually adjusts levels of steering assistance to the speed of the vehicle.

Interior noise levels were extremely low and vehicle occupants could comfortably carry on a conversation even on the unpaved roads.  The 1.3 litre auto options proved more sluggish than their manual counterparts but still acquitted themselves well in the hilly terrain of the Yarra Ranges.

The on-board navigation system performed well and came into its own when we were forced off the Western Ring Road after a 3 car pile-up. 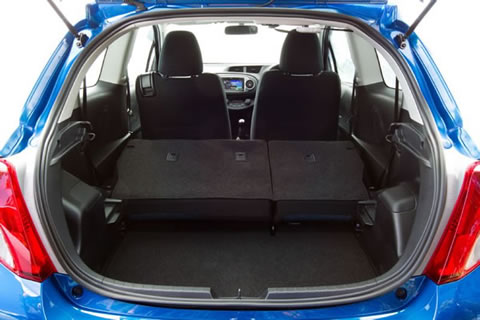 Price
Intense competitive pressure in many sectors of the automotive industry has seen consumers benefiting over recent years.  It comes as no surprise that Toyota have delivered a well priced range of vehicles to attract consumer attention.

Yaris pricing starts at $14,990 for the entry level YR three-door hatch with a 1.3-litre petrol engine and manual transmission – unchanged from the release of the previous YR model in 2005. The five-door YR is available for a further $700 at $15,690

All new Yaris hatches are well equipped and feature upgraded audio systems with controls on the steering wheel spokes, a multi-information display that includes a trip computer, air-conditioning, electric power steering, power windows and mirrors and a 12-Volt accessory socket.

Conclusion
Toyota has spent a lot of time and money on delivering a vehicle that will widen its appeal within the tough light vehicle segment.  They have succeeded in producing a high quality compact car that will sit comfortably amongst its rivals.

The Yaris is no longer just a “chick-mobile” but a stylish and credible offering for a wider audience looking to downsize or provide a second vehicle for the family.   With its standard safety features, quality accessories and highly competitive pricing structure it remains just the type of car you’d like to see your teen wrapped in as they begin their solo efforts on the roads and more importantly, I think it’s a car your teen would like to drive as well!

We Drive the 2011 Toyota Yaris