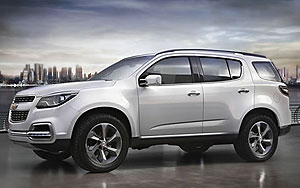 It’s been a while since Holden had anything in its line-up that could compete with the likes of the Toyota Landcruiser wagon or the Mitsubishi Pajero but that is set to change some time in the first quarter of 2013 when the Holden Colorado 7 is set to arrive.

This heavy duty off-road SUV is currently making its global debut at the Dubai Motor Show as the Chevrolet Trailblazer. While final details of what we’ll see in the local vehicle are yet to be decided Holden says that what you see here in the Chevy Trailblazer is very close to what you’ll see when it arrives here as the Colorado 7.

The Colorado 7 was designed in Brazil and it will feature body-on-frame construction, accommodation for seven people and a new 2.8-litre turbo-diesel engine. Fuel consumption figures have not yet been released by Holden but the promise is that this new engine will have the fuel-efficiency expected by today’s “modern family”.

Particular attention was paid to the design to ensure that it has … what Holden describes as … “excellent” approach and departure angles to ensure that the Colorado 7 really can do more in the rough than just talk the talk. Holden also promises that their new SUV will come with the towing ability of a working vehicle. 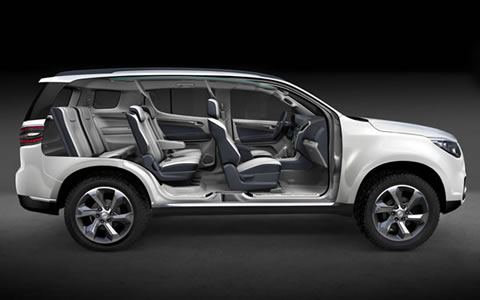 On the inside the Trailblazer/Colorado 7 will come with all the creature comforts that you would expect including digital climate control and from the photos that Holden have supplied you will see that the flagship model will certainly feature everything a family could want … and the lighting is interesting too.

I don’t know about you but while this may be a totally new design I can’t help feeling that I’ve seen this vehicle somewhere before. While it does not remind me of a Toyota I think that it does bear some resemblance to something from Korea … perhaps that’s just an indication that we’ve reached the design limits for big SUVs. 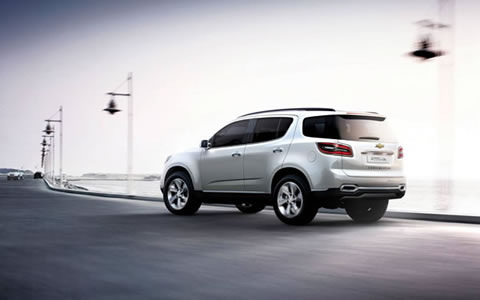 Regardless of what it looks like it is good to see that we finally have Holden back in the big SUV market. It’s almost 10 years since we had a Jackeroo on the showroom floor and if this is as good as the Jackeroo was then we just might see some interesting movement in the serious 4×4 SUV market.

It’s just a shame that we have to wait till 2013 to see the Colorado 7 here in Australia.