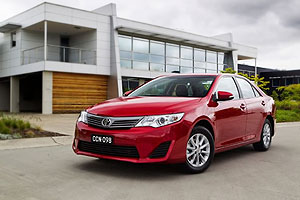 If you live in the bush you may be forgiven if you missed the news that Toyota have released a new Camry for 2012 because out here there’s not been a whole lot said about it.

That’s rather sad really because the 2012 Toyota Camry has appeared with a new 2.5-litre four-cylinder engine coupled to a six-speed auto transmission in all models and that’s definitely worth talking about. It’s especially worth talking about when you see the fuel consumption figures that Toyota is promising.

The 2012 Toyota Camry has been in the planning stage since 2006 and Australian engineers have been involved right from the start and anywhere the Camry is sold you’ll find engineers from Toyota Australia working towards making the Camry compatible with the local conditions.

The range
There are four models in the 2012 Toyota range. For the fleet buyer and the household that just wants a basic vehicle there is the base model … the Camry Altise. It comes with the new engine and transmission combo tuned to provide 133kW of power and 231Nm of torque and to do that the Altise needs just 7.8L/100km of fuel.

A touch-screen display is not standard but can be fitted as an option along with a reverse camera.

Atara S
Next in the range is the Atara S and this is the first time the Atara name has appeared in the Camry range. Toyota have aimed this model at private buyers and those who get to choose their own works cars thanks to salary sacrifice or novated leases.

With the Atara S you get some body-styling changes, more goodies and even a little more power. Toyota have found an extra 2kW of power and more torque simply by fitting a dual exhaust system and there’s keyless entry and start, fog lamps, reverse camera, dual zone air-conditioning, a touch-screen audio display, an electric driver’s seat and more.

Leather interior and moonroof are options for the Camry Atara S

Atara SX
Above the Atara S is the sports version … the Camry Atara SX … with sports suspension, rear spoiler, some additional body features and leather-accented interior. The only option for the SX is a moonroof.

Atara SL (Grande)
And at the top of the 2012 Toyota Camry range is the Atara SL and it comes with lots of goodies including a premium audio system with 10 speakers, 7-inch touch-screen display that includes sat-nav.

Digital radio makes its appearance in the Toyota range with its inclusion as standard in the Camry Atara SL and live traffic updates are included. The reversing camera includes a back guide monitor and there’s automatic high beam, rain-sensing wipers, electric rear sunshade, rear parking sensors, exterior mirrors that dip when you select reverse and the blind spot monitor that I mentioned before.

Other good points for the new 2012 Toyota Camry include increased leg room for those stuck in the back seat and the interior has a little more width too. The front pillar has been reshaped to make it a little thinner and that means better vision for the driver and the centre pillar is slimmer too.

Blind spot monitor
This comes as standard on the 2012 Camry Atara SL and it warns drivers if there’s a vehicle in the blind spot on either side of the car. Sub-millimetre radar is used to detect other vehicles and when a vehicle is detected a light appears in the relevant side mirror and stays illuminated as long as the vehicle remains hidden in the blind spot.

And that’s the new 2012 Toyota Camry … around 100,000 will be built at the Toyota plant in Victoria this year and 70% of them will be exported but that still leaves a lot for us here in Australia.