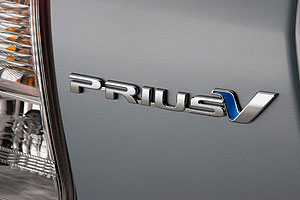 Australians seem to be more than a little reluctant to embrace hybrid technology in their motor vehicles but that hasn’t stopped Toyota from chancing their arm with yet another hybrid vehicle and this time Toyota is after the larger family with the Toyota Prius V.

Although it’s obviously a member of Toyota’s Prius family the Prius V sees a change the technology used in the Prius … and the Hybrid Camry too. Instead of being fitted with the nickel-metal hydride battery used in the standard Prius the Prius V will come fitted with a new lithium-ion battery.

This new battery is smaller and lighter than the nickel-metal hydride battery but has similar storage capabilities. By using a smaller battery pack in the Prius V Toyota was able to maintain the roomy interior needed in a seven-seat wagon.

In the Prius V the battery pack has been moved from the boot area … obviously something that’s already somewhat cramped by the very design of the vehicle … to the space under the centre console between the driver and the front-seat passenger.

Moving the battery and tossing in an extra set of seats is not what Toyota has done to arrive at the Prius V you see here. Instead the Prius V is a totally new design from the ground up and it shares no body panels with the standard Prius we see on the streets today.

The new Prius V is 135mm longer, 30mm wider, 100mm higher and has a wheelbase that’s 80mm longer than the Prius hatch. It’s powered by a 1.8-litre Atkinson Cycle petrol engine that produces 73kW combined with a 60kW electric motor. 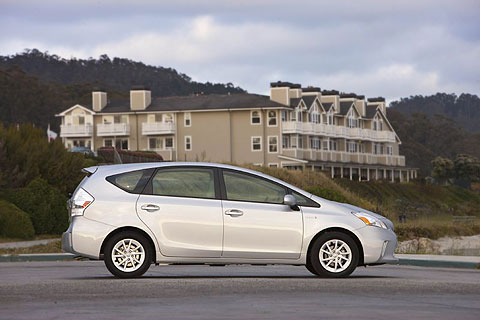 Toyota has sold 17,000 Prius models in Australia so far and perhaps the Prius V should add quite a few more. Larger families seem to be a little more environmentally aware than most groups but I guess all will depend on price.

Expect to see the Toyota Prius V in the showrooms in May this year.