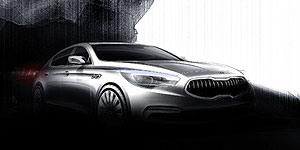 The Kia KH … a simple codename for Kia’s new flagship sedan that we should on the showroom floors in Korea in the next 4 months.

If you’ve ever wondered about how the evolution of a big car maker actually works then Kia is one car maker you should be watching because watching Kia is a bit like watching something come out of a cocoon … every little movement gives you another faint hint of what is still to come.

Kia is owned by Hyundai and for years it was obvious that every new car coming off Kia’s production line was pretty much a knockoff of something that was already in the Hyundai showrooms. Then a few years ago Kia launched a couple of vehicles that were unique … the cee’d and the Soul … and now we might be about to see something else that’s unique to Kia.

The Kia KH is Kia’s first rear-wheel drive car and Kia says that it will combine innovative design with high-tech features that’s “appropriate to a luxury car” and while that may be so the KH will still have Kia’s radiator grille just so you understand that it is part of the Kia family.

Nothing says “luxury” more than lots of chrome and Kia says that they have given the KH a “luxurious bold chrome accent” that gives the KH a “sophisticated and stable rear view”. 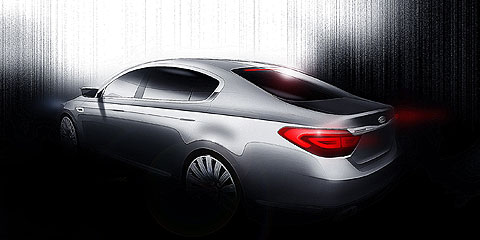 I guess we’ll have to take Kia’s word for it because until we get closer to the launch date these drawings are all we’ll see of the KH.

As I said earlier the KH will be launched in Korea first but eventually it will be available in every country where Kia sells motor vehicles.