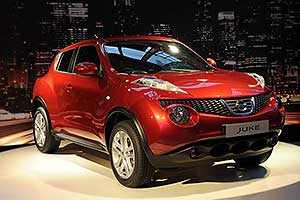 The Nissan Juke is coming to Australia. This is the small SUV that first saw the light of day back in 2008 as the Nissan  Qazana concept and you can see photos of that concept here in Aussie Motoring.

It’s actually quite interesting to compare those concept photos with the final production model.

In January 2010 Nissan announced that the Juke would go into production for sale in Europe and now … at last … it’s coming to Australia next year. (I guess when everyone else is offering a small SUV you just have to keep up with the competition.)

While Australian specs for the Nissan Juke SUV are still to be announced Nissan have told us that it will be available in all-wheel-drive and two-wheel-drive versions. Look through the photos and you’ll see that the Juke SUV is quite a smart looking vehicle and not too far removed from the original concept.