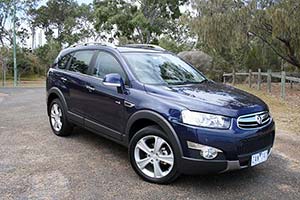 This is the second Holden Captiva we have had for review and I have to say that I approached it with some trepidation. The original Holden Captiva we tested was one of the first Captiva models to hit the market and to put it bluntly … we were not impressed.

It may have been the particular vehicle we had for the test but that first Captiva left us with some negative feelings about the vehicle that were definitely hard to shake off.

However the 2012 6-cylinder Series II Captiva 7 undid all those negative memories. That’s not to say that the Series II Captiva 7 is perfect … only one of the three drivers associated with Aussie Motoring that drove it was impressed … but in our estimation it is definitely a huge leap forward when compared to the first Captiva.

The vehicle we had for this test was the top of the range 6-cylinder Series II Holden Captiva 7 LX and the only option on the vehicle that we could identify was a factory-fitted towbar.

If you’re coming from a small car … one of our drivers regularly drives a Corolla … then the size of the Captiva 7 may catch you by surprise. It’s easy to think of this vehicle as being fairly compact … from the outside it does look that way … but once you’re in the driver’s seat you begin to realize that it’s a little bigger than you thought. 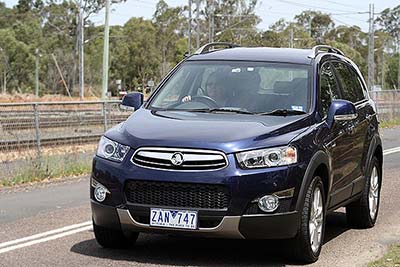 What we liked about the Captiva
All drivers were impressed by the visibility. You get such a good view from the driver’s seat that you tend to forget that the vehicle does have a nose that projects some way beyond the windscreen. 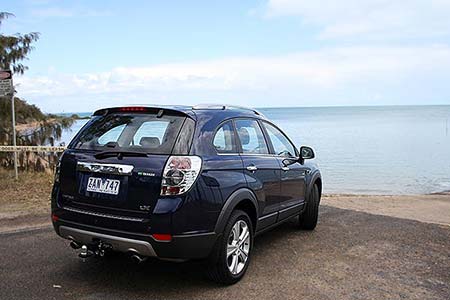 The Series II Holden Captiva LX is also fitted with a reversing camera and it really does give you a great view of what’s behind you when you’re reversing. The image is displayed in the large screen at the top of the centre stack and that really does get a big tick of approval from me. I see no point in displaying a reversing camera image in the rearview mirror where light and reflection tend to make it hard to see.

The front seats that caused us so much discomfort in the first Captiva we tested were comfortable and provided plenty of adjustment. Tall drivers will have no problems … but you wouldn’t want to be a passenger in the second row of seats if the driver and passenger are tall. There’s not much legroom if the front seats are as far back as they can go. 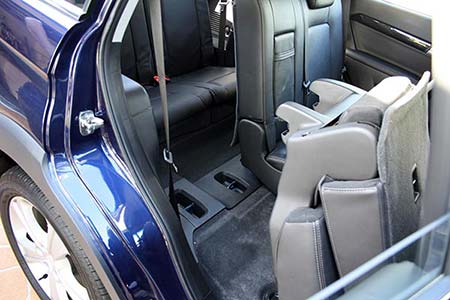 The layout of the dashboard was also quite good and you’re not overwhelmed with irrelevant information. You get all the information you need and if you want more it’s not hard to find it but it’s just not there in your face.

With the third row of seats folded flat there’s 465 litres of luggage space and 930 litres with both rows of seats folded down.  There are also several places where you can tie down or secure anything you might be carrying in the back so some people might find that the Series II Captiva 7 could double as a delivery vehicle.

Pulling the third row of seats up after they have been folded flat was a breeze … it’s a pity the same thing couldn’t be said about the second row of seats.

Things we didn’t like about the Captiva
When are Australians going to lose their fascination with leather seats? All three drivers had the same opinion after driving the Captiva on relatively mild days up here in Queensland.

If you’ve got hemorrhoids there’s a quick way to get rid of them if you happen to own any vehicle that has leather seats. Go park it in the sun for a couple of hours and then sit on the leather seat and you’ll burn the hemorrhoids off … it might be bloody painful but it’s faster than the other option.

Fuel consumption was a major cause of unhappiness among the drivers. The 6-cylinder Series II Holden Captiva 7 has a 3.0-litre SIDI direct injection V6 engine coupled to a 6-speed auto transmission that on our vehicle had a truly frightening thirst. The transmission comes with a choice of standard or Eco mode and even though we spent most of our time driving it in Eco mode the fuel consumption figures were not good.

Holden says that you can expect to get 10.1L/100km on a combined cycle. Our best figures were in the mid to high 13s around town and the mid 10s on the highway no matter how conservatively we drove.

And to top that off we found the Captiva to be sluggish regardless of which mode we were operating in.  We did think that with a 6-cylinder engine the vehicle would have been fairly lively but that wasn’t the case in the text vehicle.

Gear changes in the auto box were good but the vehicle we tested seemed to have a noisy dislike for driving at a steady consistent speed when it was in Eco mode. There was plenty of whirring and whining coming from the transmission … although you probably wouldn’t hear it if you had the sound system running.

And then there are the proximity sensors … well not so much the sensors as the noise they make. The warning buzzer is on by default so every time you turn the ignition on in a crowded garage or parking area the buzzer will sound. Of course you can turn it off but as soon as you select reverse the buzzer is activated again.

One driver didn’t see that as much of a problem … perhaps her garage is neat and tidy … but that buzzer drove the other driver and me crazy.

Those controls were so out of sight that none of us ever engaged cruise control despite the fact that a lot of the distance we covered in the Captiva was highway driving.

The Series II Holden Captiva 7 comes with big screen satellite navigation system that’s easy to see and understand but sadly it’s years out of date for anything north of Brisbane. Speed limits were wrong … too high in some places and too low in others … and you wouldn’t want to rely on this system if you’re looking for a service station and thinking you might be able to get a little further before you had to stop for fuel.

The bottom line
One of our three drivers … a young professional thinking of starting a family … and looking for a new vehicle put this on her short list. The other two thought that for a vehicle worth in excess of $40k it was a little lacking.

Look around at other vehicles in the same category and you may find something better for less although you may not find anything better if you really do need that extra row of seats.