Hyundai has released the fourth generation of its Elantra small-medium car, its global best seller and second most popular model in Australia. 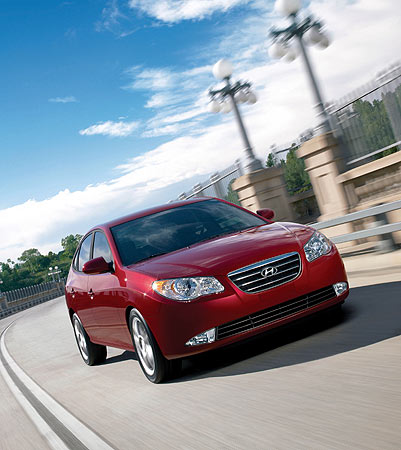 Four variants of the new Elantra sedan are offered, SX, SLX, Elite and Elite S. A Euro-hatch variant will follow in 2007.

Hyundai was rated as the top non-luxury nameplate and third outright brand after Porsche and Lexus and ahead of Toyota and Honda in their 2006 Initial Quality Study, after polling over 60,000 new vehicle buyers about their first 90 days ownership experience late last year.

Substantially roomier than either Toyota Corolla or Honda Civic, Elantra is Hyundai’s “big small car” and now straddles the small to medium categories thanks to its 65mm higher and 50mm wider cabin, 40mm longer wheelbase and 58/66mm wider front and rear wheel tracks but, handily for parking, it’s actually 20mm shorter than the previous model and has much more rounded front corners.

Interior
New Elantra is a class leader in interior room, thanks to its larger size. Front hip and shoulder room expand by 32mm and 22mm with front head and leg room up 9mm and 8mm while rear shoulder room stretches out another 40mm. A 35mm lift in front seat height improves visibility and eases entry and egress.

The sculptured dash top slopes downward from the windscreen to give a spacious feeling and greater visibility. Black or mid-grey interiors are offered and are highlighted by tasteful alloy-look finish elements on SLX and Elite. 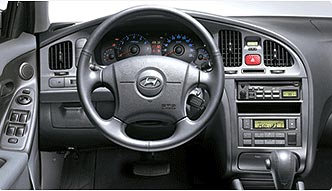 The textures and colours, the placement of audio and climate controls and the blue-hue soft-lit digital instrument lighting all project an upmarket cabin ambience.

New levels of detail and craftsmanship are found throughout the interior, including a softer-feel, perforated leather trim on the Elite S.

Equipment and Features
Firsts for Elantra include an auxiliary jack for iPodsÂ® and other portable audio devices to play through the car’s MP3/WMA/AAC-compatible CD/FM/AM sound system, heated door mirrors on all but SX, steering-wheel-mounted tabs for audio and (except SX) cruise controls and telescopic steering wheel adjustment on all but SX.

All-model conveniences like standard air conditioning with pollen filter, power windows on all doors, remote keyless entry with alarm and separate boot opener, key-out headlights-off, roof console with map lights and sunglasses bin, slide-cover vanity mirrors in both sunvisors with (except on SX) lights and a 12 volt power outlet all add to Elantra’s amenity.

The centre console features a two-level storage bin topped with a padded armrest, a first for the entry level model in Elantra.

There’s extra storage places in the dash centre stack and console; all lined with rubber mats or flocking, magazine pockets behind the front seat backrests and map pockets with bottle bulges integrated into the front door trims.

A retractable bag hook in the left front is very handy as are the dual cup holders between the front seats and in the rear central pull-down armrest which all steady the cups with rubber grip flaps.

Elantra’s big boot is enlarged yet another 35 litres, taking it to 405 litres on the SAE scale.

ESP is a cutting-edge driving stability system which, along with ABS and TCS, improves handling by controlling brake pressure and engine output during dangerous manoeuvres such as abrupt avoidance turns at speed or acceleration and braking, particularly on slippery roads. It is increasingly being credited as a major reducer of single car crashes.

ESP and TCS are standard on Elantra Elite and Elite S and optional as part of Hyundai’s Protectz Pack on SX and SLX.

Passive safety is afforded by Elantra’s airbags with two front airbags on SX augmented by two front seat-mounted side-impact thorax airbags and two full cabin side curtain airbags on all other model variants.

Hyundai’s Protectz Pack for Elantra SX adds ESP, TCS and the curtain and front-side airbags for $1790*.

Elantra SX manual with Protectz Pack at $21,780* now becomes the market’s second most affordable five-seat car with ESP after Getz 1.6 with Protectz at $16,280*.

The Protectz option for Elantra SLX adds ESP and TCS for an extra $990*.

Active front-seat head restraint which also adjust fore-aft as well as vertically are new to Elantra and help prevent whiplash injury during a rear collision. They are highly recommended by safety organisations.

New rear seat head restraints are low-profile wrapover designs which can adjust down out of rear vision’s way when not in use.

Braking and Handling
Elantra delivers a quieter, more comfortable ride and more responsive, predictable handling, with coil springs and gas dampers in MacPherson struts at the front as before and in a new design Independent Torsion Blade rear suspension.

Independent Torsion Blade is more sophisticated than the prior Elantra’s multi-link rear suspension system. It introduces upper arms and a fourth link each side and blade-type longitudinal links whose twist actions supplement the springs. The springs are separated from the shock absorbers for more optimal positioning, which also adds boot room by allowing smaller wheelhouses. The ITB’s optimised geometry incorporates an element of passive rear steer to balance and refine the car’s natural understeer handling characteristics.

Elantra’s rack and pinion steering assistance is a new EASS (Electric Assist Steering System) and is now driven by a brushless electric motor to minimise energy loss and lower parking speed effort. It is engine and road speed-sensitive and reads the driver’s steering wheel inputs and turning angle and acts on the steering column. 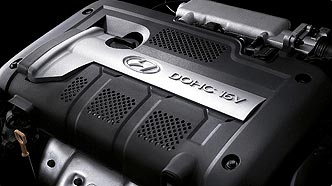 The ECU and CVVT are recalibrated to achieve SULEV (Super Ultra Low Emission Vehicle) emission levels and to match lower gearing in both manual and auto new model variants.

The result is a win-win: more spritely acceleration and lower fuel usage, despite the lower gearing and unchanged maximum power and torque figures of 105kW at 6000rpm and 186Nm at 4600rpm.

ADR 81/01 comparative fuel usage is reduced 1.3 litres/100km to 7.8 l /100km in automatic Elantras while the manual is rated at 7.4 l /100km, a 0.7l/100km saving. Indicative acceleration 0 to 100km/h of the manual is 8.9 seconds and while this is just a tenth of a second less than before, the real difference is in the feel and response of Elantra’s through-the gears performance.

The manual transmission improves durability and lowers NVH thanks to new ground-surface finished gears. A new change pattern relocates reverse at top left which is now accessed via a lift collar, ensuring snag free operation and avoiding interference with the handbrake lever.

Elantra Elite S tops the range with a power tilt/slide sunroof and perforated soft leather trim for seat facings, door trim inserts and armrests and is priced at $28,990* as an automatic only.

Hyundai Accessories offer 17″ alloy wheels and reverse sensors among a plethora of options.

As with all Hyundai models, new Elantra owners will gain more than usual assurance from Hyundai’s long-established and the industry’s original continuously offered five-year / 130,000km new car warranty, a sure sign of the maker’s confidence in the excellence of its products.