As somebody who works full time on the Internet I often lament at how many designers of web pages and the scripts that produce web pages simply seem to have no clue as to use-ability. They seem to ignore the KISS principle entirely and produce sites that look terrible and are definitely not user-friendly.

And now I see that some concept is creeping into car design too. Take the current US Ford Explorer for example. The interior designers of that vehicle have incorporated 4 cup holders into the front of the vehicle. There are the normal two in the centre console and then there seems to be one in each front door.

You might think that’s something you could live with but that extra cupholder makes life very difficult for the driver because it presses against their left leg and finding a comfortable way to sit is almost impossible.

Can something as relatively minor as a cupholder affect sales? It seems that it can with some anecdotal evidence from Ford dealers in the US that indicates people have been turned off buying the car by the discomfort caused by the cupholder in the door. 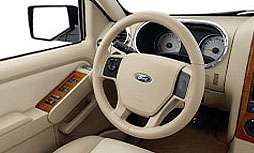 But an over-abundance of cupholders is not the only problem in the Ford Explorer. Just look at the picture and notice where the hand hold most people use to close the door is located. That’s it, tucked under the panel that controls the power windows. Reaching it and using it is said to be quite a challenge.

When Too Many Cup Holders Are Not Enough