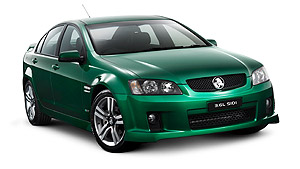 Figures released today by the Federal Chamber of Automotive Industries show Australians purchased a total of 44,387 vehicles from the VE Commodore range in 2009. The result means Commodore has been Australia’s best selling car each and every year since 1996.

“It’s been a tough year so we’re rapt Commodore has come out on top again,” Holden’s Executive Director of Sales and Marketing, John Elsworth said.

“Commodore is designed and engineered here in Australia, it’s built here and we’re very proud of the way we’ve been able to continually refine and improve it since it was first launched more than 30 years ago.”

Holden sold 119,568 vehicles in Australia in 2009, 12.8 per cent of the market, making Holden the second top selling brand behind Toyota. Mr Elsworth said the Federal Government’s investment allowance played an important part in the result.

“Cruze has done really well from the moment we put it into showrooms. Captiva has also been outstanding, comfortably outselling a bunch of rivals including Territory.”

“We’re encouraged by what we think are the early signs of recovery in the market and we’ll go into 2010 feeling optimistic,” Mr Elsworth said.