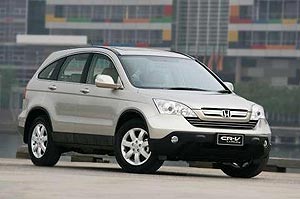 If you thought that Toyota was the only Japanese car maker that was recalling a lot of vehicles … well I’ve got to tell you that Honda is recalling a sizeable chunk too and some of them are here in Australia.

Here is Honda’s official statement on the recall of Honda Accord and Honda CR-V vehicles:

Honda Australia has expanded a recent recall of 1,323 vehicles produced in 2001 and 2002 by a further 703 units, to replace the driver’s airbag inflator.

The total number of vehicles subject to this worldwide expansion is 437,763 units.

Based on Honda’s ongoing investigation and analysis, the recall was expanded to include a further 514,355 units in North America, Japan and other regions since November 2008 and June 2009, although there have been no incidents of airbag failure reported for vehicles included this time.

SITUATION:
Some of the compressed inflator propellant* located inside the inflator of the driver’s SRS airbag was defective. As a result, when the driver’s airbag is deployed in the event of an accident or under other circumstances, there is a possibility that an abrupt increase in the inflator’s internal pressure may rupture the casing of the inflator and cause fragments of airbag parts to scatter possibly causing injury to vehicle occupants.

*chemical substance which generates gas to inflate the airbag

BACKGROUND:
First measure
1) As the result of our investigation based on incidents that occurred in the U.S. after February 2007, we identified the cause of the problem as excessive moisture intake by the compressed inflator propellant within the inflator. Based on this conclusion, in November 2008, we issued a recall notification in the U.S. and Canada.

Second measure
2) We continued our analysis as there were additional incidents involving vehicles outside of the range of the original recall. In order to prevent the same incidents from occurring in the future, we decided to expand the range and issued a second recall notification in the U.S. and Canada on June 30, 2009. A recall notification was issued for the first time in Japan on July 29, 2009.

ACTION TO BE TAKEN:
The inflator in the driver’s SRS airbag of vehicles subject to this recall will be replaced with a non-defective inflator in all affected regions/countries.

This expanded recall broadens the scope to include all compressed inflator propellant which was produced using equipment that experienced a problem. Therefore, based on our understanding, this action would rule out the possibility of the same incident occurring in the future.