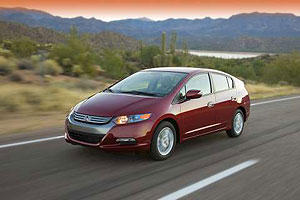 The second-generation Honda Insight is due to arrive in Australia late this year and it’s the first of a new range of hybrid models to be launched by Honda.

Despite the fact that the Honda Insight is yet to arrive in Australia it’s already attracting a lot of attention overseas and it’s one of three finalists for the 2010 World Green Car award, to be announced at the New York International Auto Show on 1 April, 2010.

The winner of last year’s award was the Honda FCX Clarity.

The World Green Car awards began in 2004 to recognise and reward automotive excellence on an international scale. Judging criteria for the 2010 World Green Car award included: fuel consumption; exhaust emissions; and use of a major advanced power plant technology (beyond engine componentry) aimed specifically at increasing the vehicle’s environmental responsibility.

The second-generation Honda Insight represents over 20 years of hybrid development with its primary aim to make hybrid technology more affordable for more people.

Previous awards won by the Honda Insight include winner of the 2009 UK Environmental Transport Association (ETA) Green Car Awards and 2009 Top Safety Pick by the US Insurance Institute for Highway Safety (IIHS).