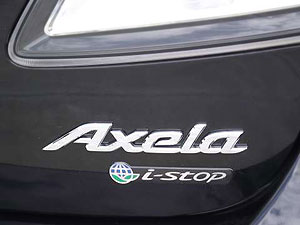 Fuel consumption has always seemed to be something of a problem for Mazda. Their small cars do well but add a little size and weight and those fuel figures start to look a little less appealing.

The first Mazda equipped with i-stop, the company’s award-winning idling stop system, is now undergoing local testing ahead of next year’s Australian launch of the fuel saving technology.

An engineering team from Mazda’s head office in Hiroshima is working closely with Mazda Australia ensuring that i-stop delivers on its promise of fuel saving without sacrificing driving fun.

Local testing will ensure i-stop technology is compatible with local fuel quality and climate conditions and meets the high standards of Australian drivers.

The i-stop system reduces fuel consumption by automatically shutting down the engine when the vehicle comes to a standstill.

Mazda’s i-stop system has been designed for use with direct injection engines and uses combustion energy to restart the engine in just 0.35 seconds, about half the time of most other idling stop systems.

Only when the vehicle first comes to a standstill does the engine shut down automatically although the engine’s control module does not cut off the engine until the pistons are in the optimum position for restart.

As the driver lifts the brake pedal to continue driving, fuel is injected directly into the cylinder, atomised, then ignited forcing the piston down. At the same time, the starter motor applies a small amount of additional momentum to the crankshaft resulting in an extremely quick and refined restart of the engine.

i-stop is just one of the many improvements that the new SKYACTIV technologies will offer customers as Mazda strives to improve global average fuel economy by 30 percent by 2015.”

Mazda’s next generation SKYACTIV-G petrol engine and SKYACTIV-Drive automatic transmission are scheduled to make their Australian debut in 2011.