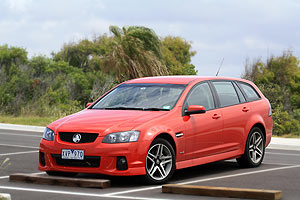 Back in September Holden launched the new Series II range of VE Commodores with a lot of talk about a new touch-screen infotainment centre.

At that time I was a bit of a smart-arse and wondered whether there was really anything that was really different between the first VE Commodores and the Series II if all Holden PR people could talk about was the infotainment system. You can read what I had to say here.

Way back in April of last year we road tested the Series I Holden Berlina Sportwagon and found that it was a good dependable vehicle. It was a Holden … it was reliable … you could get it fixed just about anywhere in Australia and that was about it. It was a nice drive but there was nothing to get too excited about

What we didn’t say was that both my partner and I found that the steering was a bit heavy and when you got behind the wheel you knew you were driving a big car. 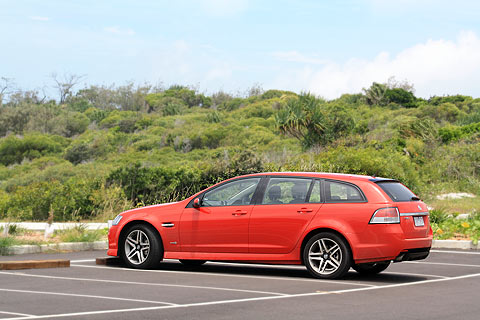 The vehicle as tested
The vehicle we tested was the Series II VE Commodore SV6 Sportwagon that Holden is currently offering from $41,990 drive away. For that price you a 3.6-litre 210kW SIDI Direct Injection motor coupled to a six-speed automatic transmission (with Active Select) and a limited slip diff.

That set up returned a combined cycle fuel consumption of 9.9L/100km.

The vehicle we tested was optioned up with a full-size spare (standard according to the Holden website is a tyre sealant kit), satellite navigation and a reversing camera.

Where we tested
We covered over 1600km in the SV6 Sportwagon and that ranged from heavy city traffic around Brisbane, highway running on the Bruce Highway that varied from smooth four-lane cruising to rough goat track where we had to weave around potholes, and secondary road cruising (that was sometimes better than the highway … and sometimes worse) when we did the tourist thing and visited the Town of 1770 and Agnes Waters on the Discovery Coast here in Queensland.

We used the vehicle as if it were our own … we did the shopping … we did the usual running about that we do for my partner’s business … and we did the after-hours social things that we do … dining out and just generally having a good time. 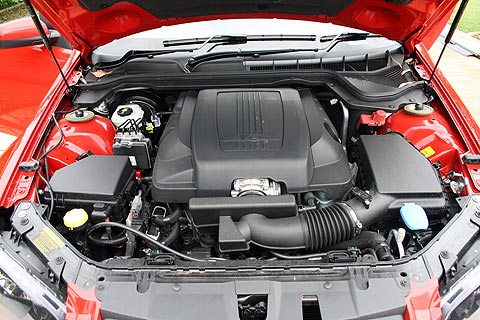 The engine and transmission
It was responsive and the gear changes in the six-speed box were smooth and barely noticeable unless you really stamped on the accelerator. Then you dropped three gears and wondered how many orbits you would do before came back to earth again..

I used the Active Select option once or twice just to see how well it worked and it was fine but it’s not something that you’ll use all the time … or even occasionally for that matter. It’s just easier to slip the gear selector into D and let the automatic gear box do its thing.

Fuel consumption was certainly within the figures supplied by Holden and it seemed to take a lot of kilometres before the 71-litre fuel tank began to run short on fuel. 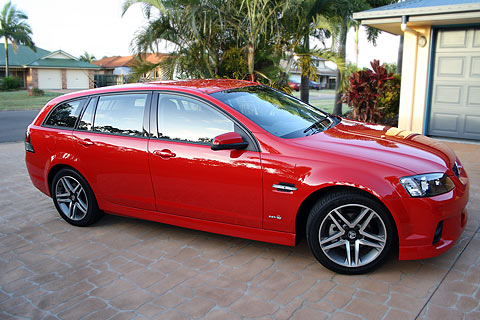 Toni thought that there were times when the wagon got a little twitchy when she really had to weave through the potholes but I didn’t notice that when I was driving. For me the steering was always very predictable and well-behaved … even at high speed.

Ride was just as good as what we had found in the Series I but the sports suspension in the SV6 kept the wagon sitting flat on tight bends and through all that pothole weaving that I mentioned earlier. Why weave through those potholes? Well up here in Queensland they tend to be deep and they can destroy your suspension and shred a tyre in the blink of an eye. 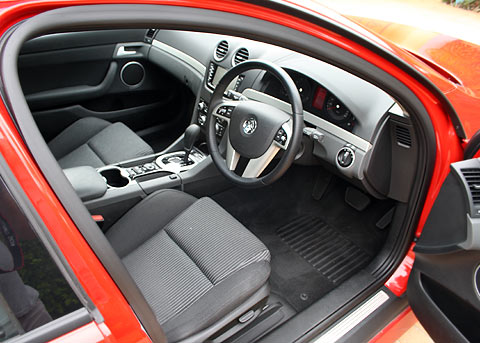 Interior
If you read the Series I road test you will have noticed that one of the things that really bugged me was all the bells and whistles that Holden have for various events. Unfortunately they still have them all … and a few more if you have the satellite navigation option fitted.

Apart from that little annoyance the interior of the Series II SV6 Sportwagon is pretty good. There’s plenty of legroom front and back and the front seats provide plenty of support for the driver and passenger. We both have bad backs and a long trip in an uncomfortable seat can really hurt but we had no trouble with the seats in the Series II wagon. 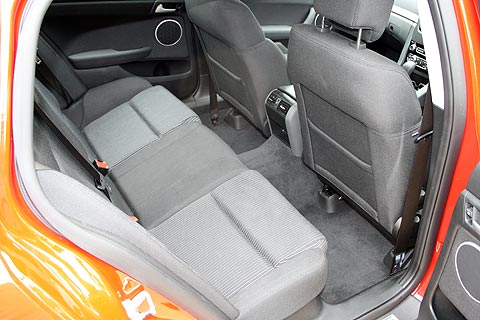 The rear seats have the usual 60/40 split fold set up and laying them down flat is a very simple matter. Getting the rear seats set up again took very little time and you don’t have to be Hercules to get pull them back into position. 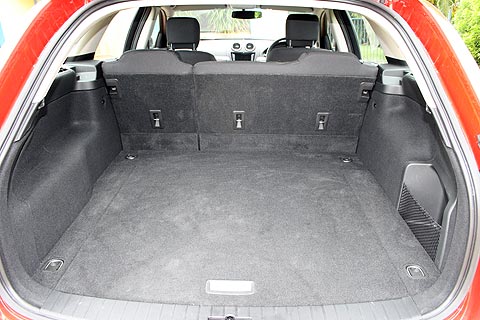 Even with the seats up in the normal position there’s plenty of room in the back of the vehicle and you could easily fit the week’s shopping plus a pram and some extra gear in the space available. There’s also plenty of storage hooks and handy little storage nets to hold small items and there’s a cargo blind as well for those times when you don’t want prying eyes to see what you’re carrying. 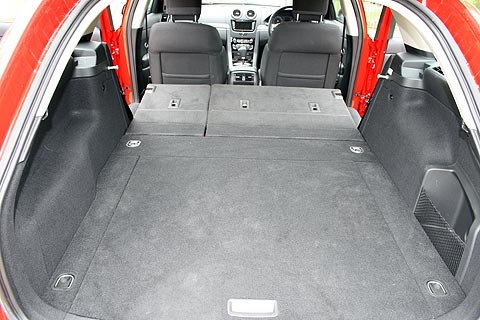 One unusual feature of the Series II Sportwagon is the placement of the vehicle’s battery. It’s not tucked away in the engine bay as you would expect … instead it’s in a compartment on the left-hand side of the luggage space. 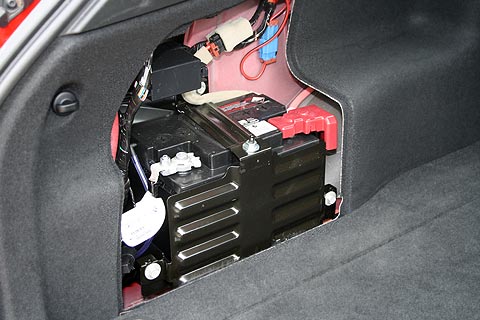 The optional full-size spare sits under the floor of the luggage area along with the jack and associated bits and pieces. Personally this is an option that I would always choose to have. Maybe I’m a Luddite but I’d rather have a spare tyre than a can of sealant any day.

Driver’s controls
The dashboard is well set out and all the instruments are easy to read and understand. On the photos of the dashboard you will notice that there’s a reflection that shows up right across the front of the gauges. You’re unlikely to notice that when you’re driving the vehicle and I certainly didn’t see it until I was checking the photos I had taken. 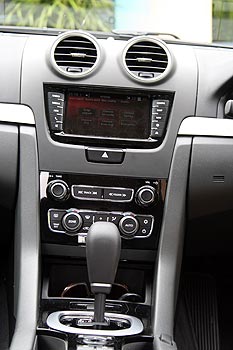 The dual-zone air conditioning is easy to operate … as are all the controls on the dash, steering wheel and centre stack. The light switch is out of sight behind the steering wheel for most drivers but it always defaults to automatic mode so it’s unlikely that you will ever need to turn the lights on manually.

I didn’t like the idea that the lights stayed on at night for some time after you’ve switched off the ignition so I always turned the lights off manually but I had no trouble finding the switch.

Setting up the stereo and the radio wasn’t difficult and Holden left a great choice of music in the system. There was everything from classical to rock and it certainly showed just how good the sound system was.

The satellite navigation system was interesting and I have to admit that it’s the first time I’ve ever used one. It’s an option in the SV6 Sportwagon and it’s an option I would probably have fitted if I were buying a new Holden.

It wasn’t a hundred per cent accurate and when it showed speed limits they weren’t always the right one for the part of the road we were driving on. For example the highway to the north of the truck inspection station on the Bruce Highway just out of Caboolture is posted for 110km/h but the satnav system was sure that it was only 100km/h. The warning that kept flashing on the main dashboard and telling me that I was exceeding the speed limit got annoying after a while.

Apart from that glitch the satnav worked quite well and you can set it to sound an alarm when you’re nearing certain locations such as railway crossings … schools … red-light cameras and even public toilets. Now don’t laugh … that’s a particularly useful feature if you’re a baby boomer on a long country trip or the parents of young kids who can only ever last from one toilet to the next.

The SV6 Sportwagon that we tested also had a reversing camera that displays on the centre stack when reverse gear is selected. We loved it! It gave a great view of what was behind us and it made getting out of shopping centre car parking spaces a breeze.

Personally we think that every vehicle on the road should have a reversing camera fitted and the display should always be somewhere on the dash and definitely not in the reversing mirror where the image is often lost in the glare. 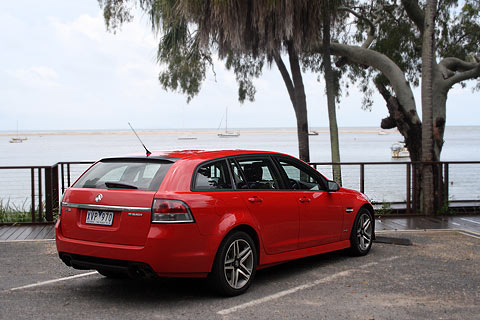 Comfort
The seats were really comfortable and after several hours on the road our backs weren’t complaining at all. Noise levels in the cabin were very low. Of course you’re going to hear some noise when you hit a pothole but the general road noise didn’t intrude into the cabin at all.

We managed to do our travelling on some of the hottest and most humid days Queensland had experienced this summer and yet we never felt any discomfort till we got out of the wagon. The air conditioning was just outstanding and every time we got out of the car we couldn’t wait to get back in.

So you want to be noticed?
Then the SV6 Sportwagon … and more particularly the Red Hot version is the vehicle you should be driving. It has an obvious presence on the road and when people look at it they just know that it take off like a rocket.

It’s also a vehicle that stands out in the crowd and you certainly won’t lose it in a parking area. 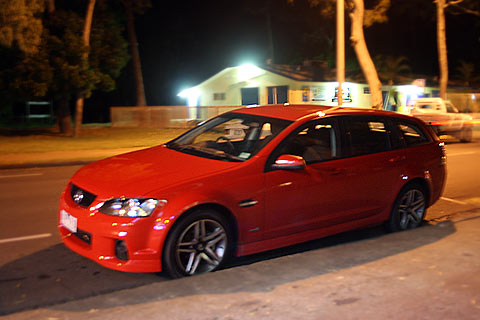 Overall
What can I say … we loved it! By comparison the SeriesI was a bit ho hum while the Series II was exciting and definitely fun to drive. We liked it so much that we really didn’t want to give it back and when that comes from a couple of confirmed SUV lovers that’s really saying something.