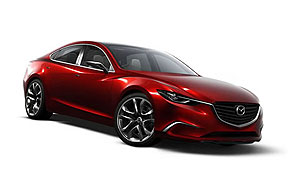 Mazda is about to let us all take a look at the next midsize sedan that they have in the pipeline. At the moment the Mazda Takeri is officially a concept car but there’s obviously not much in this concept car that needs to be removed before it becomes a production model.

The Mazda Takeri features the full range of Mazda’s SKYACTIV TECHNOLOGY and that includes a clean diesel engine, an idling stop system, i-stop and a first for Mazda … a regenerative braking system.

This new braking system converts kinetic energy to electricity during periods when the vehicle is decelerating and stores it in capacitors and then uses it to power the vehicle’s electrical equipment.

Inclusion of this braking system shows that Mazda is ready to move to commercial release of the second stage of what Mazda refers to as it’s Building Block Strategy. Stage one was the introduction of the new SKYACVTIV engines and a range of new body shapes while stage three will see the introduction of hybrid and electric drive technology. 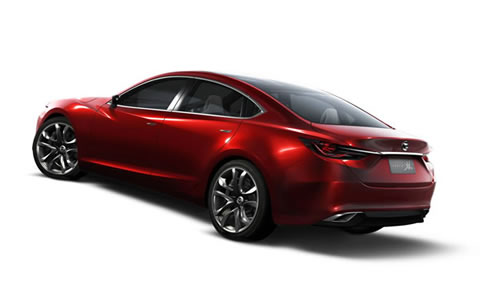