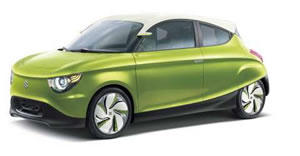 If you’re a Japanese car maker then you just have to make a statement at the annual Tokyo Motor Show and that’s what Suzuki plans to do at this year’s show. Apart from the popular range of motorcycles Suzuki says that their display will be looking at the future of small cars with cars for today … the near future … and maybe a time when we all run around in those little electric scooters that old people love so dearly.

Suzuki Regina
Well if you thought the S Concept looked hot then the Regina is likely to like being on the receiving end of a bucket of cold water. Suzuki claim that they see the Regina as being a next-generation global compact car but let’s hope the exterior goes through a serious re-design before it’s released because at the moment it looks like a throw-back to a 1950s toaster rather than a serious attempt at producing a good looking car.

While the exterior is rather sad looking those lines do a lot to reduce the drag coefficient and when that’s combined with a weight of just 730kg you end up with a petrol powered vehicle that gives you 3.1L/100km and emissions as low as 70g/km. 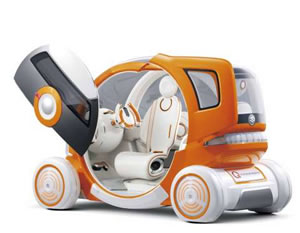 Seating in the Q-Concept can be set up for two people riding/driving in tandem or with one seat for the driver and a two-person child seat in the rear. At just 2.5 metres long the Q-Concept is not going to be for everyone and even Suzuki admit that if you want to travel more than 10km at a time you probably won’t want to do it in this car. 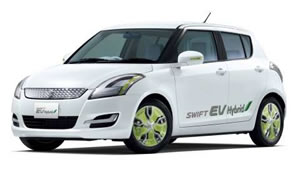 Suzuki EV Hybrid
Another Suzuki that may be for the near future is the Suzuki EV Hybrid. Suzuki knows that in Japan the average distance covered by a Swift is just 20-30km a day and the Swift EV will cover that distance on battery power alone.

If these cars really are Suzuki’s view of what the future holds then the concepts are interesting … but the visual impact may leave something to be desired.

Suzuki at the 2011 Tokyo Motor Show