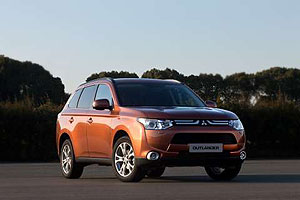 What Japanese car company launches a vehicle into the Russian market before any other place on earth gets the vehicle?

Mitsubishi that’s who and the vehicle they’re releasing into the Russian market is the new 2012 Mitsubishi Outlander. After the vehicle hits showrooms in Russia it will be released in Europe, followed by Japan, Oceania, China and North America.

Think about that list of countries for a moment and the order in which they fall because perhaps it might  tell you something about where Mitsubishi believes the money is.

Mitsubishi have not yet announced what transmission will be standard in the petrol version and they have not yet released fuel consumption figures for either version.

There will also be a plug-in hybrid power system available Outlander that will make its appearance shortly after the initial launch.

The forward collision mitigation system detects obstacles on the road ahead of the Outlander and automatically applies the brakes to prevent a collision. The LDW warns the driver if the vehicle is about to drift out of the lane it’s in and the adaptive cruise control system operates to maintain a safe distance between the Outlander and the car in front.

The ACC system even works at low speeds in heavy traffic … hmmm I hope you can turn it off or it’s going to be a major source of irritation for many drivers in stop-start city traffic.

Interior
The new Mitsubishi Outlander comes with an upgraded instrument panel that features high-resolution instrument displays, silver accents on the switches and a soft-touch material across the panel.

A  power-operated tailgate will be a feature of the new Outlander.

So there are some changes and the hybrid Outlander does look interesting but you have to wonder if we will ever see it here in Australia.