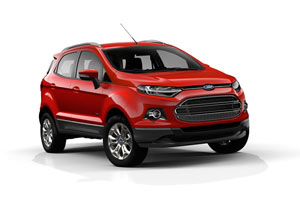 If you’re looking for a big booming V8 SUV that will double as a bulldozer or to a plow in your paddock the new Ford EcoSport … announced earlier this year … is definitely not for you.

But that’s not to say the EcoSport is somehow lacking … or not a real SUV … because it certainly isn’t. It’s a vehicle that is definitely going to have a big market appeal in third-world countries … and more affluent countries … like Australia … too.

Sure, the EcoSport was first launched in India and then in China but Ford is focused on selling this compact SUV throughout the world and they have stated that it will be offered “in nearly 100 markets globally”. In fact you could describe this version of the Ford EcoSport as a truly global vehicle because it was designed in Brazil and will be built in India, China, and Thailand and the capacity of the plants where it will be built is enough to supply a global demand.

So at some stage it’s quite likely that we can expect to see the Ford EcoSport here in Australia so what can we expect? 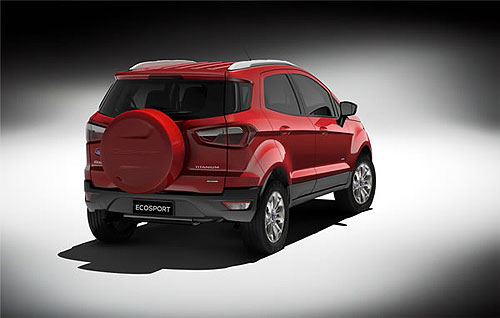 The body
The Ford EcoSport SUV is built on Ford’s new B-class platform and features what Ford describes as “high torsional stiffness and high levels of protection for occupants”. Ford says that it will seat five … although you have to wonder just how big some of those five could be.

Ground clearance is good  … far more than you would see in a town car… and the vehicle also has what Ford describes as “integrated lower body cladding for robustness”. The spare wheel is attached to a swing gate at the rear of the vehicle. 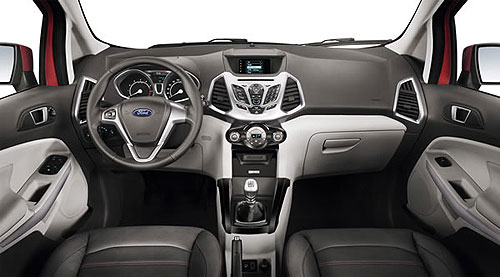 The interior
You would expect a vehicle like this to have fairly spartan creature comforts but that may not be the case … even at the entry level. Seats will be upholstered in “soft-touch” materials and “Ice Blue” lighting will be featured.

At the upper end of the comfort scale you can expect to find Ford SYNC with voice control, keyless entry, Ford Power Start and even a cooled bin in the glovebox.

Obviously a few of those features are going to be restricted to the top of the range EcoSport and by the time the vehicle reaches Australia there could be even more safety features included. 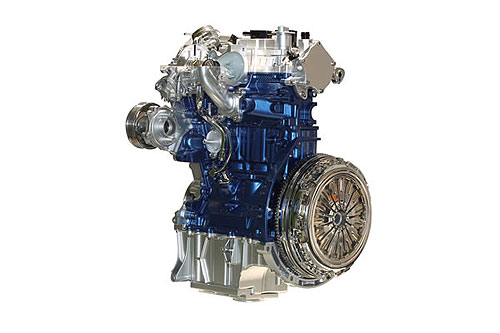 The engine
The EcoSport SUV has been designed to take a variety of engines and transmissions but In Asia and China it will be fitted with Fords all-new three cylinder, 1.0-litre turbo-charged and fuel injected engine mated to a five-speed gearbox. Ford claims that this engine develops the power of a normal 1.6-litre engine and they say that we can expect to see this three-cylinder engine appearing in vehicles in just about every country where Ford has a presence.

The engine was developed at Ford’s technical centre in the UK and features an exhaust manifold that’s cast into the cylinder head. This arrangement lowers the temperature of the exhaust gases and that allows the engine to run with the best fuel-to-air ration across a wider rev band.

Interestingly in a vehicle where weight is important the designers have chosen to use cast iron instead of the more usual aluminium. Cast iron was chosen because it needs 50% less energy to warm up than an aluminium engine needs.

So if you’ve got an urge to see over the top of all those city cars and you’ve just got to have a Ford badge on the grille the new Ford EcoSport might be worth waiting for … although you might have to wait a few years.